Posted by Tommyb at 9:01 AM No comments:

After a long delay, the 1st Battle of Kernstown finally took place.
We used a combination of 'RF&F' and 'They Couldn't Hit an Elephant' from Two Fat Lardies.
RF&F was used to resolve combat while TCHAE covered movement. The two rule sets worked
well together and after a rather slow start and a little tweaking the pace picked up and we all agreed
that the 'feeling was right.'
The table was 6' x 4' and the troops were deployed historically.
Objectives were Pritchard's Hill in the center and the stone wall near the Glass house on the left.
Control of both objectives by one side at games end was necessary for a major victory.
If neither side controlled both objectives a casualty count would decide which side scored a
minor victory. 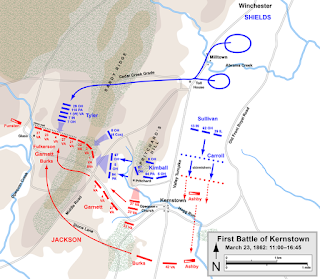 The lighting was not good in the gaming room so none of the pictures I took came out well enough to post but I like to see pictures as much as the next guy so here are three showing the initial deployment of three of the units involved in the battle. 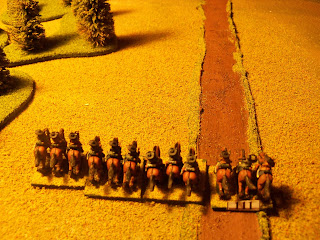 Sullivan's Brigade on the Union left moving through the woods toward Kernstown. 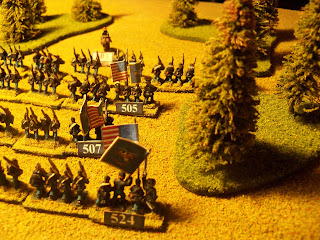 And finally, Fulkerson's Brigade moving to the stone wall on the Confederate left. 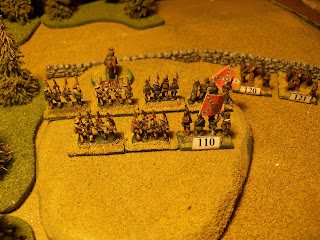 We were unable to finish the game which was not surprising being our first go with these rules
but we all agreed that the game had the right feel to it and the card driven movement added a good deal of uncertainty to the game play.
When we ended the Confederates held the stone wall and the Union sat atop Pritchard's Hill.
The Union had the heavier casualties but that may have changed had the game done on as scheduled
so we called it a draw and everyone left happy.

Posted by Tommyb at 2:15 PM No comments:

The painting is now pretty much complete. There's some touch up and a bit of flocking to be done but in all I'm nearly there. 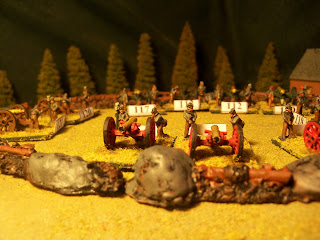 Turner Ashby's Cavalry will hopefully provide the intelligence that Jackson needs if he is to succeed. General Jackson believes the he outnumbers the Federals when in fact they greatly outnumber him. 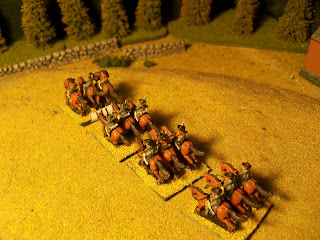 Two Brigades of the Union Army under the command of Colonel Nathan Kimball will enter North of town. The Third Brigade, Tyler's will arrive later in the day as reinforcements. 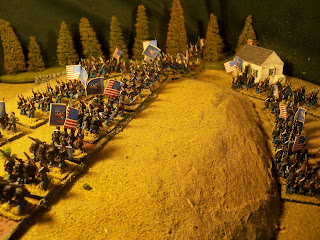 I'm going to be putting on the Battle of Kernstown later this summer so I thought I'd pick up some 10mm figures. I bought some Old Glory, Pendraken and had some AIM command figures which have been gathering dust, unpainted for years now.
The Old Glory come in strips of five but don't fit on the 1" base so I just snipped off a figure.
We're  using "They Couldn't Hit an Elephant" rules from Too Fat Lardies. I like the uncertainty and friction that the provide.
The Confederates are just about complete and the Federals should be finished by the end of the week.

I'll post an AAR. This is my first go around with TCHAE rule set so I'll let you know what we thought of them.

Here are a few pictures of the Rebels preparing to meet the Union just north of Kernstown March 23, 1862. 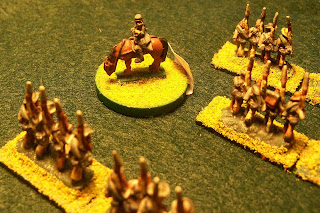 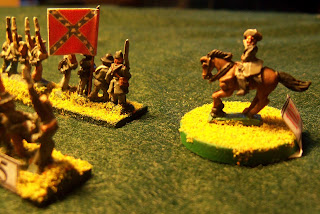 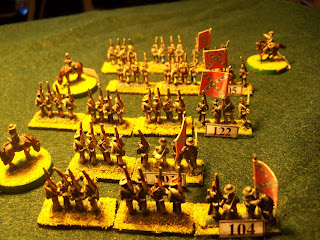 Posted by Tommyb at 2:07 PM No comments:

The Union didn't come out as well as the Confederates though. 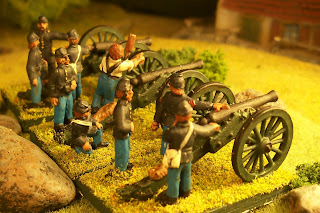 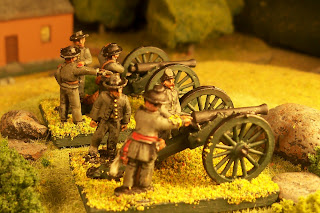 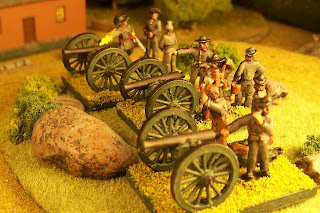 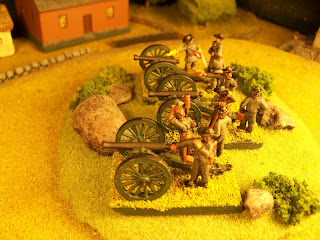 The blue uniforms were just too dark to pick up the undercoat. I tried using a navy blue but it came out looking too purple. For now I'll stick with the midnight blue from Creamcoat.

Thought it might be a good idea to show you were I work.
It's pretty typical of a wargamer's workbench, a little chaotic but familiar and comfortable. 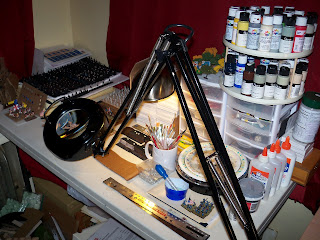 The set up is right when things are where they are when you need them.

Some minis to the left of the table ready to be painted. 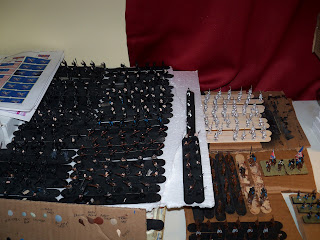 The day I took these pictures I was working on some 15mm scale buildings.
I rough cut some balsa and then covered the structure in joint compound. 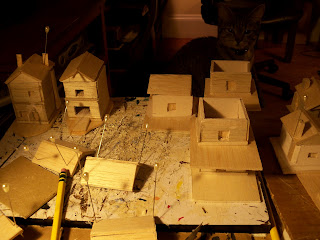 One of the finished buildings. 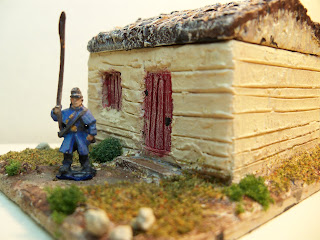 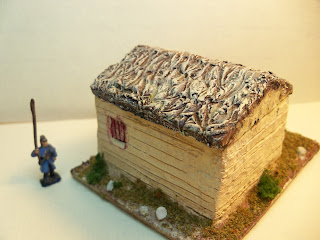 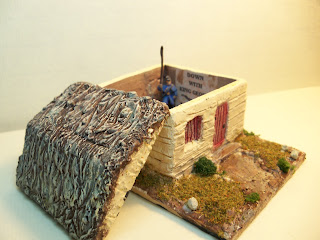 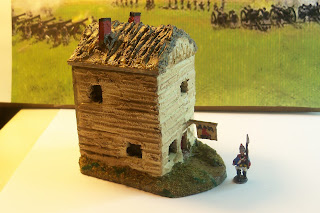 I like Stone Mountain Miniatures. The figures are well proportioned and easy to paint.
I recently purchased their Civil War Personalities packs and painted them up in no time flat.
I was impressed at how recognizable the figures were when finished.

All of the following are 15mm. 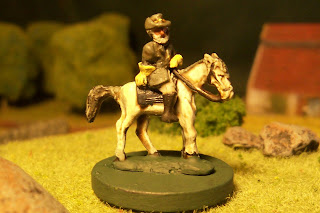 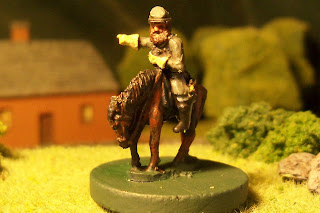 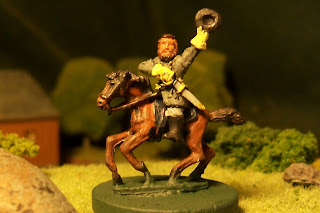 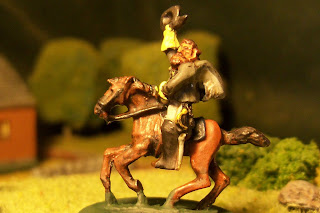 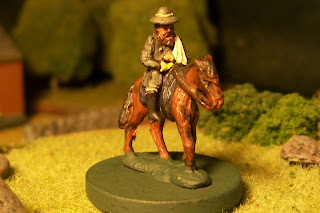 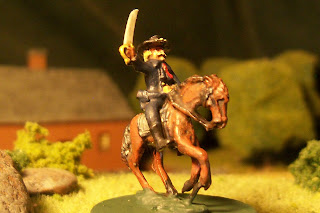 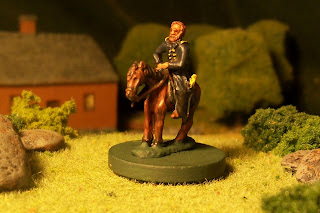 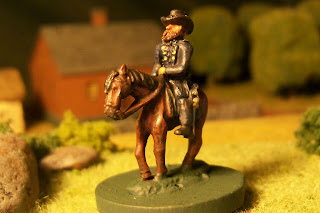 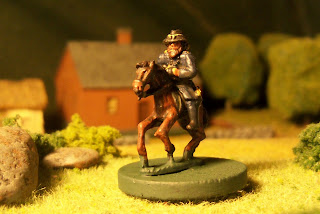 The Generals are available through Stone Mountain in packs of six at $7.50 +s/h.

Tommyb
Massachusetts, United States
I retired in June of 2010. I'm married with children & grandchildren, a cat and two tanks of fish. All of which keeps me busy enough but there is downtime in retirement and I plan to fill this time painting little men. Painting them & then pitting them against one another on the battlefield of my choice.